What is Sexual Assault?

Sexual assault is forced, manipulated or coerced sexual contact. It includes rape, child sexual abuse, same-sex assault, acquaintance rape, harassment and marital rape. The perpetrator uses sex to inflict physical and emotional violence and humiliation on the victim, or to exert power and control over the victim.

Myths and Realities of Sexual Assault

Speak Out Against Rape Culture!

You Are Not Alone - Information for Survivors of Sexual Assault - CHINESE

You Are Not Alone - Information for Survivors of Sexual Assault - VIETNAMESE

You Are Not Alone - Information for Survivors of Sexual Assault - ENGLISH

It is important to get medical care after a sexual assault as soon as possible. You may have injuries you don’t know about or your injuries may be worse than you think. You may also be at risk for sexually transmitted infections (STIs) or unintended pregnancy.  Healthcare providers can examine you for injuries and provide treatment for STIs. In some cases, you can also get medication that will prevent STIs or pregnancy.  Keeping your body healthy is an important part of healing from the assault.

Federal and state law requires that sexual assault victims must be able to receive a forensic exam without paying for it.  In Nebraska, the exam is paid for by the state's Sexual Assault Payment Program Cash Fund.  This fund should pay for the examination, the facility fee, any lab fees for pregnancy testing, testing for sexually transmitted infections (STIs), and the collection and processing of evidence.  These costs should not be billed to you or submitted to your insurance.

You or your insurance could be billed for expenses related to medical treatment, such as medications for injury or infection (e.g. pain killer, antibiotics), x-rays, MRIs, or a doctor's fee that is billed separately from the hospital, and not covered by the Sexual Assault Payment Program Cash Fund.

The Coalition recognizes the significant and unique barriers that incarcerated victims of sexual assault face in securing safety and healing.  The process for accessing advocacy services and making PREA reports may change in the near future, therefore please contact us directly for updated information.

If you would like information on PREA Standards or to make a PREA report please contact Kim Carpenter at kimc@nebraskacoaliton.org or call 402-476-5043.  You can also write to Kim at:

The following brochures can also offer information regarding PREA standards and rights of survivors who are incarcerated and have experienced sexual violence.

Safe for the Sentence Brochure

Safe for the Sentence Brochure - Spanish

The Nebraska Attorney General's Office in cooperation with the Nebraska State Patrol, and Nebraska Coalition to End Sexual and Domestic Abuse have released a best practice Medical Sexual Assault Protocol. We hope this assists in further creation of standards around Sexual Violence in our State. (Released June 2019)

Barriers to Helpseeking for Sexual Violence Survivors in Nebraska

This report investigates the extent to which survivors of sexual violence in Nebraska seek out services from domestic violence and sexual assault (DV/SA) programs serving rural communities as well as the factors surrounding survivors’ decisions to seek out help.

Drawing from a review of local, state, and national data as well as feedback provided in focus groups conducted with survivors of sexual violence, the authors conclude that the vast majority of sexual violence survivors in Nebraska do not seek out help from local DVSA programs.  The report examines barriers to helpseeking and provides recommendations for mitigating these barriers. 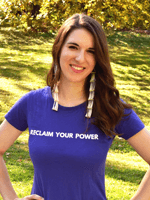 The Nebraska Coalition to End Sexual and Domestic Violence announces that Kirby Williams is Nebraska’s recipient of the National Sexual Violence Resource Center Visionary Voice Award.  Kirby Williams is an enrolled citizen of the Cherokee Nation of Oklahoma.  She holds master’s and bachelor’s degrees in Clinical Psychology from Missouri State University.  Since 2014, she has worked in her professional and personal life to raise awareness and promote prevention of domestic violence, dating violence, sexual assault, human trafficking, and stalking.  She currently focuses the majority of her work on serving Native American survivors of these crimes.  Kirby has conducted numerous trainings addressing violence dynamics, including for the Missouri Sexual Assault Nurse Examiner Training (SANE), Nebraska State Patrol, the Nebraska Victim Assistance Academy (NEVAA), the Mayor of Omaha’s Native American Advisory Board, and other agencies and organizations throughout the United States.  She is a Class 5 graduate fellow of the National Human Trafficking Leadership Academy (HTLA), in which she and 11 other Indigenous fellows addressed how culture can be used as a protective factor in the trafficking of all Indigenous youth.  For her work in violence prevention, she was named an inaugural recipient of the Cherokee Phoenix’s Seven Feathers Award.

In addition to her understanding of violence against Native Americans, she has a background of knowledge and training in psychological diagnostics, statistical analysis, the impact of trauma from a physical and psychological perspective, healing from a culturally relevant perspective, and yoga teaching.  She currently serves on the board for the Nebraska Commission on Indian Affairs (NCIA).

ABOUT THE VISIONARY VOICE AWARDS

The Visionary Voice Awards are presented annually in conjunction with Sexual Assault Awareness Month by the National Sexual Violence Resource Center (NSVRC), a national nonprofit providing information and tools to prevent and respond to sexual violence.  Each year, state, territory, and tribal coalitions select an individual to nominate for the awards. Nominees may be survivor activists, community partners, longtime advocates, policy makers, or other outstanding individuals who have worked to end sexual violence.

Sexual Assault Awareness Month (SAAM) is an awareness and prevention campaign observed every April. This year’s theme,  “We Can Build Safe Online Spaces,” highlights the importance of practicing consent online and building respectful online communities. Join the campaign by accessing free resources at nsvrc.org/saam. Resources are available in Spanish at nsvrc.org/es/saam.